As 2019 came to a close the CTMS Operations and Project Teams celebrated their many accomplishments with a festive holiday sweater party and potluck of ‘comfort foods.’  The teams have both worked incredibly hard to make the first full year following CTMS go-live a success.

The CTMS Operations Team’s major accomplishment in early 2019 was the production of data table 4 for the Fred Hutch Cancer Center Support Grant to the National Institutes of Health.  From there the team has focused on providing excellent support to the many end-users that interface with CTMS in their jobs.  The Help Desk handled 1,701 new requests for support this year! Some additional numbers to illustrate the significant efforts of the program this year include: 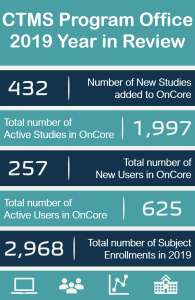 The first half of the year the Project Team successfully completed a “small scale design effort” between January and August of 2019 to perform the groundwork and planning needed to formally kick-off the Target 3 project in September of 2019. The effort entailed 5 working groups coming together to define draft workflows for study budget management, coverage analysis and coding, Epic charge master, Epic billing grid interface, and OnCore-Epic charge master mapping. The investment in small-scale design has been helpful in mobilizing the teams for full scale design. On September 25, 2019 the full scale design was successfully launched in a session hosted by the CTMS Executive Sponsors – the project shared the proposed scope, timeline and design approach to the full team including study teams that are represented in various Design & Adoption Advisory Groups. Currently the Project Team is fully immersed in detailed design with 10 + working groups and 3 Design & Adoption Advisory Groups coming together to review workflow and data requirements in detail and recommending future state workflow design. Design is expected to complete by early March 2020.

Another notable accomplishment of the Project Team was the support provided to the UW Clinical Trials Office and other teams at UW Medicine in implementing a standardized research pricing model that removes cost center level variations for research facility pricing at UW Medicine. This change went effective on October 1, 2019 and is a key prerequisite to the implementation of a standardized research charge master in the CTMS.

The Project Team also welcomed 6 analysts to the team who will be engaged in detailed analysis, configuration, testing and data back-loading for the CTMS as the team proceeds with the Target 3 implementation.

The CTMS Operations and Project teams are grateful to each of you, and wish you a happy and joyous holiday season!