Carlos De La Peña was the executive director of the Institute of Translational Health Sciences (ITHS). In this role, Dr. De La Peña directed all financial, operational and programmatic functions of ITHS, an institute primarily funded by the Nation Institutes of Health’s Clinical and Translational Science Awards (CTSA) Program.

Before Dr. De La Peña came to ITHS, he spent four years as Administrator of the Clinical & Translational Science Institute of Southeast Wisconsin from 2010-2014. Prior to that he was the Associate Director of the Clinical and Translational Research Center, the CTSA at the University of Texas Southwestern Medical Center in Dallas. Dr. De La Peña has also worked as a Clinical Manager for Southwest Medical Center in St. Louis, Director of Operations for La Clinica St. Louis-Community Health Care Centers in St. Louis, and as Supervisor of Campus Operations for the University of Arkansas for Medical Sciences in Little Rock.

Dr. De La Peña earned his medical degree at the Universidad Autónoma de Madrid Medical School.  He holds an MBA from University of Texas at Arlington, and a Master of Healthcare Administration from George Washington University as well as an International Master of Business Administration. 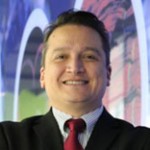