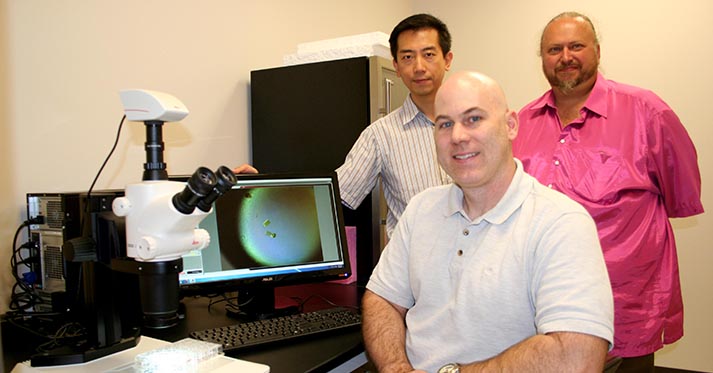 Exposure to antibiotics has been shown to play a direct role in the development of Clostridium difficile, or C. diff., infections. Ironically, the standard treatment for C. diff. is more antibiotics.

Dr. Kirk Hevener, an ITHS Regional Translational Scholar and Assistant Professor of Biomedical and Pharmaceutical Sciences at Idaho State University, thinks an alternative treatment for C. diff. could already be on the market. But first, he has to find it.

C. diff. infections have been growing in both frequency and severity, causing nearly 500,000 new cases and 29,000 deaths a year in the United States alone.

The toxin-producing bacterium causes inflammation in the colon, resulting in watery stools and extreme dehydration. Like its cousins tetanus, botulism, and gangrene, C. diff. produces hardy, heat-resistant spores that can live on a surface for months. The spores can be washed away, but are not inhibited with alcohol-based hand sanitizers. Without strict precautions, spores shed through a patient’s feces can be transmitted to hands, utensils, and food, and then swallowed by someone else.

Swallowing the spores does not always lead to illness though. In fact, a small percentage of people carry the bacterium without any signs of disease. In most people, the beneficial bacteria that are normally present in a healthy gut suppress would-be pathogens, like C. diff.

That is, until antibiotics are introduced.

Broad-spectrum antibiotics destroy all bacteria in the gut, including the good guys. This disruption gives C. diff. a chance to grow and multiply, says Hevener. It is also difficult to treat. Around 35 percent of people will suffer a recurrent infection.

Hevener is searching for an existing drug compound that would kill C. diff. organisms while leaving the beneficial gut bacteria intact. Compared to discovering and developing a new compound, repurposing existing drugs for different diseases is faster and more cost-effective, Hevener explained. Plus, existing drugs have already been evaluated for safety and pharmacokinetics.

As a result, Hevener is focused on identifying a compound that inhibits a unique enzyme found in the bacterial fatty acid synthesis pathways of C. diff. The unique enzyme, called FabK, is not found in other organisms that are associated with healthy gut bacteria.

To find that existing compound, Hevener plans to screen three compound libraries against the FabK enzyme to identify inhibitory agents with potential for rapid clinical translation.

From there, he will conduct whole cell antibacterial testing to confirm the compound inhibits the FabK enzyme and the growth of the C. diff. bacteria. After that, they would move to animal and, later, human trials. “It is a multi-step, multi-year process,” Hevener said. “Even repurposing drugs is still a long process.”

“More Than a Pilot Funding Program”

The program is “much more than a pilot funding program,” Hevener said. “It’s a career development program that allows me to be a part of monthly activities that will help me develop into a successful faculty member.”

Hevener added that the monthly conference calls, onsite meetings, and grant writing workshops have supported his career development. “For a junior faculty member that is still tenure-track and trying to establish himself, I’ve found the program to be extremely valuable,” he said.